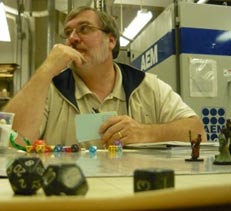 Full time technology educator teacher nearing retirement. Golfer who is not quite a good as he thinks he is. Married to wife Linda, with two-stepchildren and a grandson. Spends way too much time doing things other than gaming. Playing D&D and Greyhawk since summer of 1980, became involved with the RPGA’s Living Greyhawk game with the advent of 3E in 1999-2000. Prime Minister of the Regulators, one of the premiere gaming groups of LG. Keoland Triad member from 2005 until the end of the campaign, and a LFR admin for a time as well.