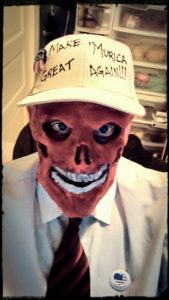 The Blaise is a dangerous inhabitant of the seventh layer of the Empire State. It Is typically encountered either at a role-playing game convention, at a public service event, or in its lair (a comfortable three-bedroom suburban home CA 1920).  Although it originated in the swamps as part of a group of crazed immigrants, who subsisted mostly on pirogues and cabbage, it has since evolved, developing an exoskeleton that resembles a not for profit executive.

Creatures with true seeing can penetrate the façade to reveal the horrific Eldritch horror that lives beneath the pink exterior.   Over the last two decades it has spent its free time developing dangerous dungeons designed to devastate Dudley Dorights, both physically and mentally.  It can also successfully impersonate an adventurer, which skill it uses to learn how to amuse and confuse mortal heroes.  It can be summoned using a ritual contained in the Book of Faces, but only the foolish or the fearless would venture to do so.