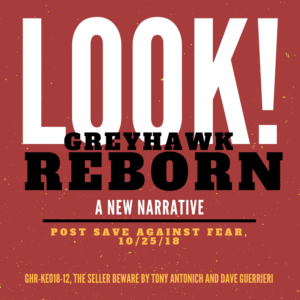 A Change of Plans by Tony Antonich

A Keoland Post-Convention Narrative for GHR-KEO18-12, The Seller Beware by Tony Antonich and Dave Guerrieri, that premiered at Save Against Fear on October 12, 2018

The cloaked figures moved through the evening with a calmed practiced gate.

“This really is not good news,” the one spoke to the other in Thieves Cant as they continued along in the darkness.

“Yes” the other answered dispassionately, “but it is not our fault, remember that”.

Reaching the door of the tavern, they slowly opened the door and a wash of light and noise fell into the empty street behind them. Moving through the portal and closing the door behind them, they made their way through the assembled crowd to the bar inside. A large half-orc standing on one end the bar saw them, flashed the sign and motioned his large head to them and towards the back of the room.

The shadowy, solitary figure sitting in the high-backed booth saw the two heading towards him. Taking a sip from the goblet in front of him, he motioned the taller of the two to sit down opposite of him and excusing the other back to the crowed bar.

He watched the man leave, “Can he be trusted?” the shadowy figure asked.

“For your sake you better hope so, … so, what news?” he asked as he leaned back.

“News is not well, my Lord. Arreix has been found out and routed.” “It will be several weeks before we can re-establish operations”.

“And the shipment?” the figure asked.

“You have information on them?”

The shadowy figure took another drink, and contemplated his next move, like a man focused on a chessboard, strumming his fingers on the table.