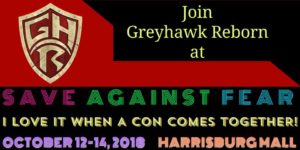 We will be at Save Against Fear — a gaming convention in Harrisburg, PA — on October 12-14, 2018 (Friday through Sunday) sponsored by the Bodhana Group who advocates for the use of tabletop gaming as a directed therapeutic and clinical practice that can benefit personal growth & enhance social and educational services to individuals and their families.

We are rounding up judges now and will soon have more information available. Information about Save Against Fear can be found at https://www.thebodhanagroup.org/about-the-convention. 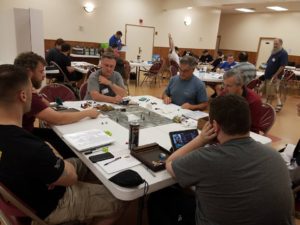 It was more amazing times of gaming and fun in Harrisburg, PA this past weekend with Greyhawk Reborn at Gamers of Summer! We enjoyed judging and playing with all our familiar faces, and really loved meeting and gaming with our new players! We ended up running 19 tables of Greyhawk Reborn over the 6 slots of the convention.

I’d like to take a moment to thank the people who helped make Greyhawk Reborn at Gamers of Summer 2018 a great success!

• First, everyone who sat and played at our GHR tables. We consider Greyhawk Reborn a shared story-telling experience between our GM/authors and our players, and that was certainly evident this past weekend. Dice were tossed, monsters were overcome and innocents were saved. Lots of fun was had, lots of laughter ensued. That is our first priority, everyone having fun. Your spare time is very valuable, and we thank you for choosing to spend some of your valuable time with Greyhawk Reborn.

• The biggest thank you to our GMs for Gamers of Summer 2017: Scott Davenport, Matt Dunn, Tom Garlic, Dave Guerrieri, Anthony Keller, Benson Sherman, Jay Stypinski, and Dave Peterson. You folks are the reason for the player’s enthusiasm and enjoyment! Our campaign is dependent upon the quality of our judges, and our repeat play and continued growth shows how good you guys are. I’ll put you folks up against any other campaign out there!

• A big thank you to Doug Howard and the rest of the Gamers of Summer 2018 staff. You folks are friendly, helpful and adaptable. Hats off to your folks!

• A special note to my 3 tables of players! I was lucky enough to run a 3 part series over the weekend, and I have to say, I had one of the best weekends GM’ing I’ve had in a long time. It was a blast, from the very first swing of the first round where a bad dwarf drummer was destroyed by a crit to the very last swing that prevented the completion of the ritual in the nick of time! I had a great time GM’ing for your folks. Huge thank you’s to the players at my tables this weekend: Clayton Webb, Max Berlove (2 tables), Jeff Fernandez, Nick Lawrence, Cheryl Klunk, Eliza (all 3 tables), Justin Vacula (all 3 tables), Anna O’Connor, Brendan O’Connor, David O’Connor, BD Blake, Anthony Keller, and Chris Bakota.

We are currently working on some Greyhawk Reborn game days in the Gettysburg, PA and Rockville, MD areas, so stay tuned for more information on those shortly.

We will also be at Save Against Fear, a gaming convention in Harrisburg, PA on October 12-14, 2018 (Friday through Sunday). It is sponsored by the Bodhana Group, who advocate for the use of tabletop gaming as a directed therapeutic and clinical practice that can benefit personal growth as well as enhance social and educational services to individuals and families. We are rounding up judges now, and will have a more information available soon. Information about Save Against Fear can be found at https://www.thebodhanagroup.org/about-the-convention.

And yes, we will also be at Fall MEPACON in Scranton, PA on November 16-18, 2018. We are also currently rounding up judges and planning our schedule for MEPACON.

For more information regarding Greyhawk Reborn, you may use the following links:

We look forward to seeing you at these upcoming events!

For any questions you may have about Greyhawk Reborn, please contact Dave Guerrieri at info@greyhawkreborn.net

Thank you again for choosing to spend some of your valuable time to participate in Greyhawk Reborn!

Lots has been happening in the background of Greyhawk Reborn in recent months. We have some announcements:

END_OF_DOCUMENT_TOKEN_TO_BE_REPLACED

GHR is offering one table each in two slots on August the 25th starting at 11am at Dream Wizards in Rockville, MD.

END_OF_DOCUMENT_TOKEN_TO_BE_REPLACED 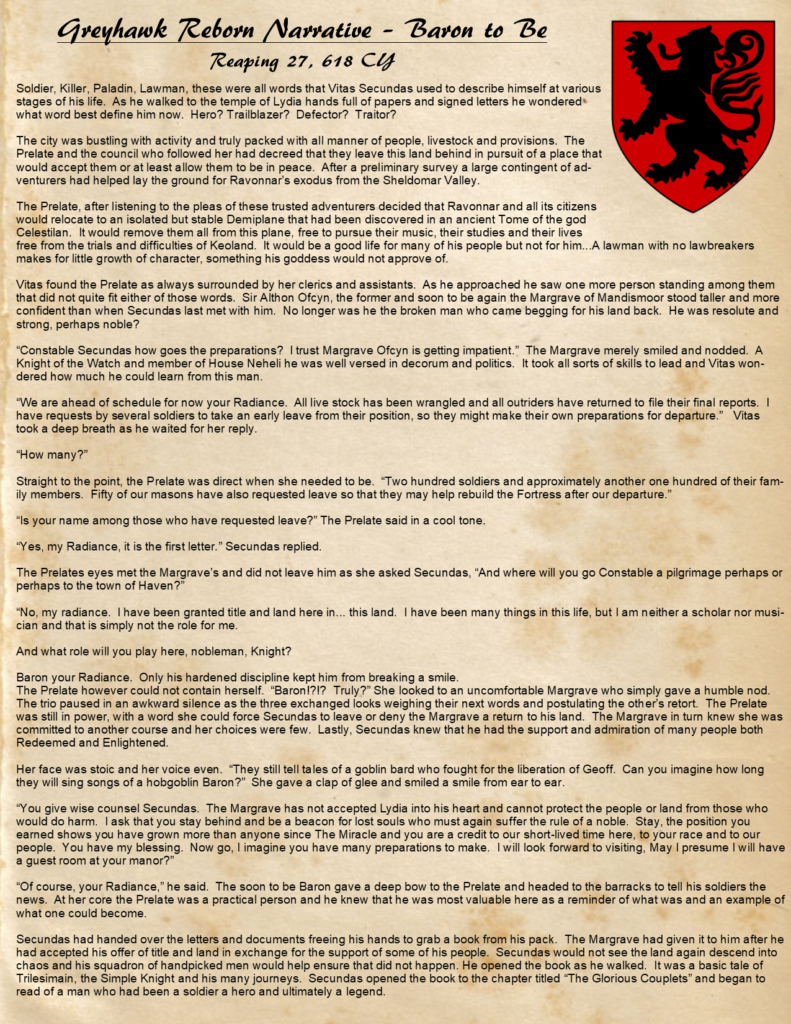 Soldier, Killer, Paladin, Lawman, these were all words that Vitas Secundas used to describe himself at various stages of his life.  As he walked to the temple of Lydia hands full of papers and signed letters he wondered what word best define him now.  Hero? Trailblazer?  Defector?  Traitor?

The city was bustling with activity and truly packed with all manner of people, livestock and provisions.  The Prelate and the council who followed her had decreed that they leave this land behind in pursuit of a place that would accept them or at least allow them to be in peace.  After a preliminary survey a large contingent of adventurers had helped lay the ground for Ravonnar’s exodus from the Sheldomar Valley.

The Prelate, after listening to the pleas of these trusted adventurers decided that Ravonnar and all its citizens would relocate to an isolated but stable Demiplane that had been discovered in an ancient Tome of the god Celestilan.  It would remove them all from this plane, free to pursue their music, their studies and their lives free from the trials and difficulties of Keoland.  It would be a good life for many of his people but not for him…A lawman with no lawbreakers makes for little growth of character, something his goddess would not approve of.

Vitas found the Prelate as always surrounded by her clerics and assistants.  As he approached he saw one more person standing among them that did not quite fit either of those words.  Sir Althon Ofcyn, the former and soon to be again the Margrave of Mandismoor stood taller and more confident than when Secundas last met with him.  No longer was he the broken man who came begging for his land back.  He was resolute and strong, perhaps noble?

“Constable Secundas how goes the preparations?  I trust Margrave Ofcyn is getting impatient.”  The Margrave merely smiled and nodded.  A Knight of the Watch and member of House Neheli he was well versed in decorum and politics.  It took all sorts of skills to lead and Vitas wondered how much he could learn from this man.

“We are ahead of schedule for now your Radiance.  All live stock has been wrangled and all outriders have returned to file their final reports.  I have requests by several soldiers to take an early leave from their position, so they might make their own preparations for departure.”   Vitas took a deep breath as he waited for her reply.

Straight to the point, the Prelate was direct when she needed to be.  “Two hundred soldiers and approximately another one hundred of their family members.  Fifty of our masons have also requested leave so that they may help rebuild the Fortress after our departure.”

“Is your name among those who have requested leave?” The Prelate said in a cool tone.

“Yes, my Radiance, it is the first letter.” Secundas replied.

The Prelate’s eyes met the Margrave’s and did not leave him as she asked Secundas, “And where will you go Constable a pilgrimage perhaps or perhaps to the town of Haven?”

“No, my radiance.  I have been granted title and land here in… this land.  I have been many things in this life, but I am neither a scholar nor musician and that is simply not the role for me.

And what role will you play here, nobleman, Knight?

Baron your Radiance..  Only his hardened discipline kept him from breaking a smile.

The Prelate however could not contain herself.  “Baron!?!?  Truly?” She looked to an uncomfortable Margrave who simply gave a humble nod.  The trio paused in an awkward silence as the three exchanged looks weighing their next words and postulating the other’s retort.  The Prelate was still in power, with a word she could force Secundas to leave or deny the Margrave a return to his land.  The Margrave in turn knew she was committed to another course and her choices were few.  Lastly, Secundas knew that he had the support and admiration of many people both Redeemed and Enlightened.

Her face was stoic and her voice even.  “They still tell tales of a goblin bard who fought for the liberation of Geoff.  Can you imagine how long they will sing songs of a hobgoblin Baron?”  She gave a clap of glee and smiled a smile from ear to ear.

“You give wise counsel Secundas.  The Margrave has not accepted Lydia into his heart and cannot protect the people or land from those who would do harm.  I ask that you stay behind and be a beacon for lost souls who must again suffer the rule of a noble.  Stay, the position you earned shows you have grown more than anyone since The Miracle and you are a credit to our short-lived time here, to your race and to our people.  You have my blessing.  Now go, I imagine you have many preparations to make.  I will look forward to visiting, May I presume I will have a guest room at your manor?”

“Of course, your Radiance,” he said.  The soon to be Baron gave a deep bow to the Prelate and headed to the barracks to tell his soldiers the news.  At her core the Prelate was a practical person and he knew that he was most valuable here as a reminder of what was and an example of what one could become.

Secundas had handed over the letters and documents freeing his hands to grab a book from his pack.  The Margrave had given it to him after he had accepted his offer of title and land in exchange for the support of some of his people.  Secundas would not see the land again descend into chaos and his squadron of handpicked men would help ensure that did not happen. He opened the book as he walked.  It was a basic tale of Trilesimain, the Simple Knight and his many journeys.  Secundas opened the book to the chapter titled “The Glorious Couplets” and began to read of a man who had been a soldier a hero and ultimately a legend.