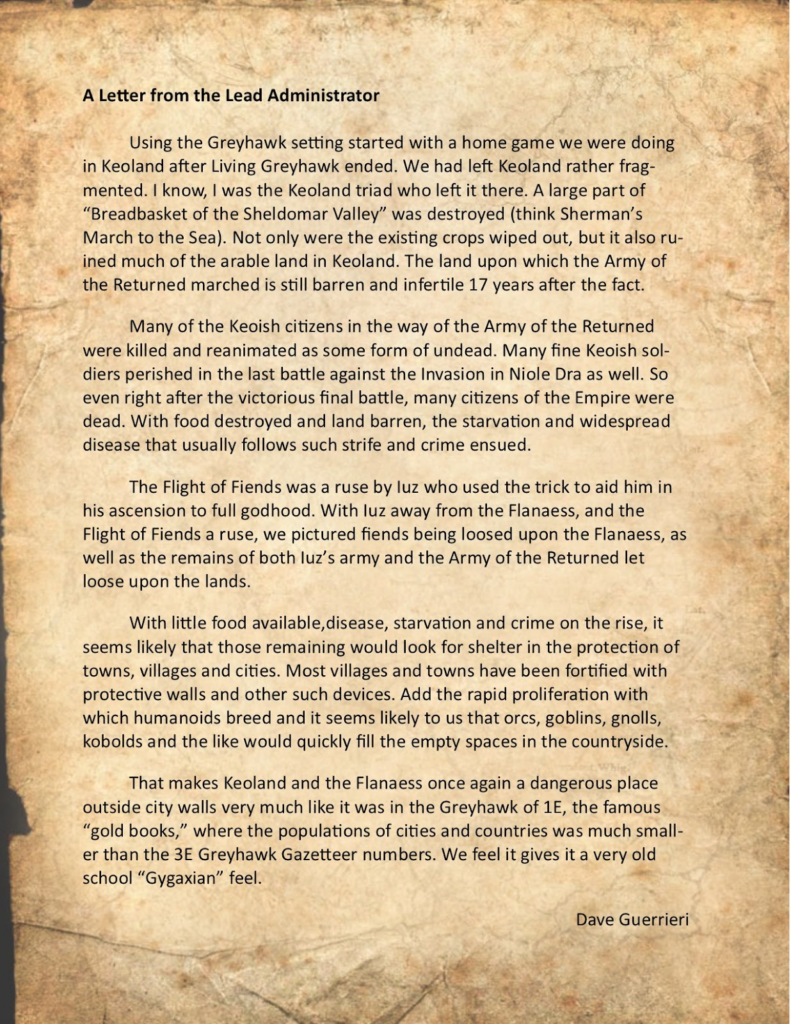 Have Fun. Everyone at the table should enjoy the adventure. Every person at the table including the DM is sacrificing time and/or money to play this particular game.

Story is King. The campaign is a shared storytelling campaign. Every adventure is created to involve you and your character in the World of Greyhawk.

Invest Players in the Campaign. You and your character should have the opportunity to become fully immersed in the World of Greyhawk when you play and adventure.

PCs Actions have Consequences. You and your character likely wish to become legends. Together, we strive for fun, interactive play opportunities to help PCs reach legend status. However, there are also consequences for each PCs actions – some rewarding and some not-so-much.

Role-Playing and Roll-Playing are not Mutually Exclusive. We are aware that different playstyles exist. Our DMs write their own adventures, so their versatility promotes a respectful and entertaining experience for all play styles.

Expand the Campaign. We strive to involve as many people in the creative process as possible to help the campaign grow.

I very much enjoyed the one game that I bought a ticket for: a Greyhawk Reborn 5e D&D adventure. This campaign, run by a group of hardy folk led by Dave Guerrieri, was built from the ashes of the old Living Greyhawk campaign. It very much had the Living Greyhawk feel, and it definitely scratched my playing itch. I laughed much and enjoyed the company of other intrepid adventurers in our trek into Keoland. – Shawn Merwin

The “other” 5E games were a major disappointment for me. My two GHR game sessions were, without a doubt, the bright spot of my 2015 Gen Con experience. The DM’s were great, the players were great, but most importantly the administration of the games was expertly handled in a professional manner. My only complaint would be that there needs to be more!! – Chris Stevens

Had a blast! Exactly what I had hoped it would be and Dave was an exceptional host! Look forward to reading the handbook on the trip home and becoming more involved in this amazing endeavour called Greyhawk Reborn! – Rob Gruber

Big thanks to the Gencon judges and crew! I had a great time on Sunday. It was cool seeing GHR in Indy again. Lots of smiling faces in the room… that’s making magic guys… congrats! – Erik Keen

Greyhawk Reborn administrator Dave Guerrieri spoke with Justin Vacula of our website and media team. Listen to their conversation about the Greyhawk Reborn campaign and parallels between Stoic Philosophy and Dungeons & Dragons available as an episode of Justin’s Stoic Philosophy Podcast available on YouTube, SoundCloud, iTunes, and Stitcher. Find more information here on Justin’s website.